Of Ignorance and or Mystery 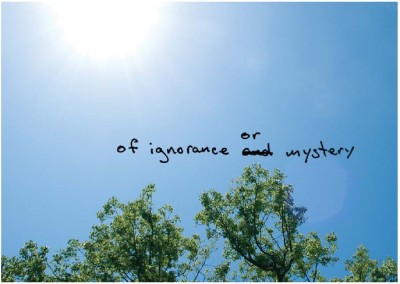 Traywick Contemporary is pleased to present Ken Fandell's location-inspired project Of Ignorance and or Mystery. In this new project, Fandell weds many recurring themes from his prodigious body of work, such as issues of site specificity, narrative and formal loops, the relationship between the familiar and the awe inspiring, the collision of the handmade and the overproduced, and the often frustrating quest for knowledge and meaning.

Referencing the origins of Traywick Contemporary's current exhibition space (a former Masonic temple), the central piece of Of Ignorance and or Mystery is a sprawling text that wraps around the temple/living/exhibition space and winds up leading back to its own beginning. Throughout its circular journey, the text relates one of the current resident's feelings about the space to conspiracy theories related to the masons to historical events and mysteries of the 20th Century. These comparisons lead to contemplations of obscure fields of pseudo-scientific study and inquiry to controversial political statements that describe a philosophy of unawareness. The void of knowledge brought up then leads to thoughts about ongoing change in the universe and the possibility of an afterlife. Written by hand by the artist and subsequently transformed into small-scale white acrylic sculptures, each word and phrase of the text simultaneously announces itself and disappears into its surroundings. Accompanying this central piece are a short video and photographs that draw upon some of the same inspiration and imagery evoked by the text.

Born in Evanston, IL, Ken Fandell received his MFA from the University of Illinois at Chicago in 1996 with an emphasis on photography and new genres. In 2007 he has been featured in numerous exhibitions including: MCA Exposed: Defining Moments in Photography 1967-2007, Museum of Contemporary Art, Chicago, IL; InWords: The Art of Language, The University Museums of the University of Delaware, Newark, Delaware; Antennae, Houston Center for Photography, Houston, TX; 2007 DePauw Biennial, The Galleries at Peeler, DePauw University, Greencastle, IN; Rise and Set (site specific collaborative project with Chicago based artist Diana Guerrero-Macia) Hyde Park Art Center, Chicago, IL. He currently splits his time between Brooklyn, NY and Chicago, IL.