View Images from the Exhibition 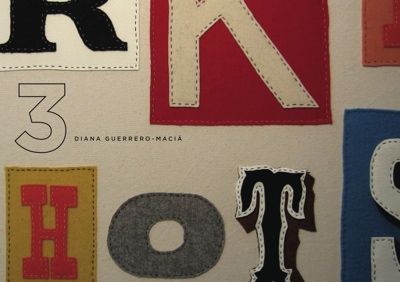 Traywick Contemporary is pleased to present 3, an exhibition featuring three artists whose work intersects with their interest in appropriating and recontextualizing recognizable imagery and text as weel as traditional and unexpected materials.

Diana Guerrero-Maciá is a Chicago-based artist best known for her hand-sewn pieces that incorporate text and quotes sampled from popular cultural sources such as album titles, song lyrics, newspaper headlines, movies and novels. Her playful and paradoxical approach to language resonates through her materials of choice: wool, vinyl, cotton, and leather. Guerrero-Maciá received a BFA from Villanova University (1988) and an MFA from the Cranbrook Academy of Art (1992). She has exhibited her work in numerous exhibitions including Bodybuilder and Sportsman Gallery, Chicago; Artpace, San Antonio; Museum of Contemporary Art, Chicago; and Museum of Contemporary Art, St. Louis.

Bay area artist Kelsey Nicholson's large-scale installations re-create the natural world by incorporating materials meant to "improve" upon Nature, including realistic wood veneers and wall paper murals depicting the idyllic outdoors. Nicholson's synthetic landscapes mediate our experience of nature by using a combination of static materials and an ever-expanding sense of place. Since receiving her MFA from UC Davis in 1996, she has received notable attention for her installations at various venues including New Langton Arts (the 1998 Bay Area Awards Show), Southern Exposure, the Marin Headlands Center for the Arts and the Richmond Art Center.

Lena Wolff's quilt-like collages start with paper whose surfaces have been coated in layers of graphite and acrylic, and are then punctured with pin pricks and layered with her own cut-up drawings. The resulting work inspires a folk-art state of being both fantastical and precarious. Lena Wolff earned an MFA in Printmaking from San Francisco State University (2003) and a BA in Creative Writing from Mills College (1995). Wolff has exhibited at The San Francisco Arts Commission Gallery, The Legion of Honor Museum, Southern Exposure, Headlands Center for the Arts, Needles and Pens, and in Philadelphia at Space 1026.