The Oblivion Before the Beginning 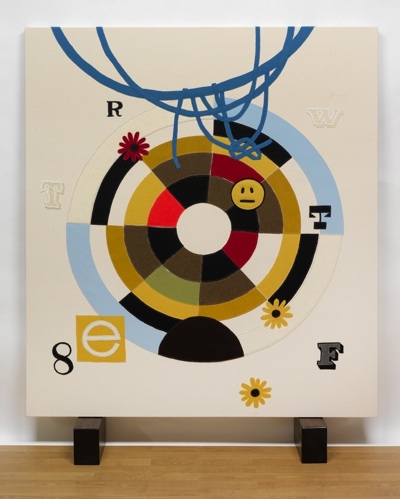 Diana Guerrero-Maciá's works defy the conventional concept of painting. Pieces of wool, vinyl, cotton, felt and leather are sewn together by hand and stretched like a canvas, producing a contemporary take on the traditional colonial sampler. Guerrero-Maciá often samples material from popular culture, exploring how recontextualization can affect meaning. Intrigued by the possibility of a found object being a catalyst for an idea, she simplifies visually compelling objects into the two-dimensional space of the canvas. Though text features prominently in her work, precedence is given to form and font rather than narrative organization. In so doing, her work presents reading as a process of visual interpretation.

Diana Guerrero-Maciá earned a BFA from Villanova University in 1988 before earning a MFA from Cranbrook Academy of Art in 1992. Since 2001, she has served as an Associate Professor in the Department of Fiber and Material Studies at The School of the Art Institute of Chicago. Her work has been exhibited extensively, including solo shows at the Museum of Contemporary Art, Chicago and Artpace, San Antonio. Guerrero-Maciá has received several awards, including a Louis Comfort Tiffany Foundation Award, and has also completed a number of public commissions.