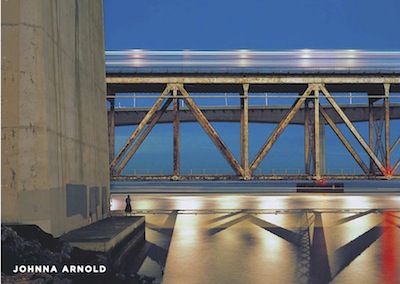 In her latest series, Arnold reexamines the landscape genre: imbuing the urban environment with an unexpected sense of the sublime. The artist places herself in the context of the Bay Area freeway system, juxtaposing the harsh beauty of its utilitarian topography and the fragility of the human being. For Arnold this complex, and yet universal, relationship signifies progress and accessibility as much as it does a mastery of and separation from the land.

Though situated in specific locales, many of Arnold's photographs seem to deny specificity of both place and time. Instead the images take the phenomenon of transition as their subject. Lengthened exposure times capture streaks of red and white lights from passing cars or the blurred rush of a moving train, traces of the freeway's status as a place in-between places. Similarly many of the photographs seem to exist in a state of timelessness, as day becomes night and night becomes day.

Accompanying the photographs will be a video and sound installation that further blurs the boundaries of artist, subject and setting. The viewer enters a large-scale sculpture inspired by a camera obscura, and is positioned at the intersecting paths of the natural landscape, the freeways and the artist herself as she traverses this bustling hybrid "planet" of her own creation.

Johnna Arnold received her MFA in 2005 from Mills College. She has exhibited her work extensively throughout the Bay Area, including the San Francisco Arts Commission Gallery, Southern Exposure and the SFMOMA Artist's Gallery.