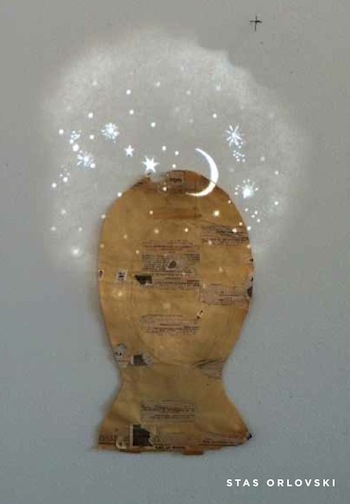 In Orlovski's latest body of work, drawing, collage and animated projection inform one another in installations that defy any strict material definition. These installations combine static and dynamic elements to activate the artist's drawing process and translate Orlovski's body of imagery into a kinetic form.

Discreet animated fragments accumulate much like a collage, as the artist groups and layers an archive of projected moving sequences and wall-based images. The resulting compositions are as inherently fluid as the subconscious realm from which they are mined. Images such as sculptural fragments, disembodied eyes, botanicals, birds, night skies, and rainstorms coalesce and dissipate to evoke a series of shifting narratives. In his words, "The animations function as apparitions, memories, or psychological projections. I mine Victorian scrapbooks, Soviet-era Russian children's books, Japanese prints, and Dutch botanical illustrations in search of the bittersweet, the quaint, the melancholy, and the picturesque. These sources are reimagined, reorganized, and refashioned into a space where disparate histories, events, dreams, and desires collide."

Stas Orlovski earned a BFA from York University in Toronto in 1992 before earning an MFA from the University of Southern California in 1996. Orlovski's work is featured in prominent private and public collections including the Fine Art Museums of San Francisco, the Houston Museum of Fine Arts, the Phoenix Art Museum, the University of Southern California and the American Embassy in Brussels. Orlovski has received several awards and fellowships, including of a City of Los Angeles Individual Artist Grant and the J. Paul Getty Trust Fellowship from the California Community Foundation. In 2012, Orlovski was commissioned by the Los Angeles County Museum of Art to create a site-specific animated work in conjunction with the exhibition, Drawing Surrealism. In 2014, Orlovski will have a solo exhibition at the Pasadena Museum of California Art.