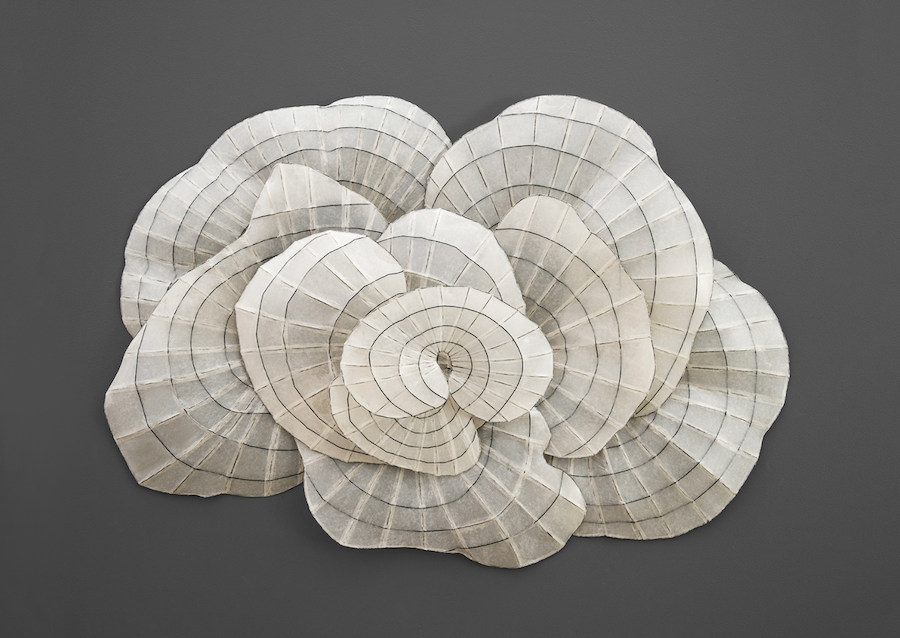 Traywick Contemporary is pleased to announce Field Notes: an exhibition of new sculpture by Nancy Mintz. For her second solo show with the gallery, Mintz examines the relationship between personal identity and the natural environment. Showing concurrently at the gallery is Rachel Davis: First One Hundred Days. Both exhibitions address notions of change, while exploring the ways in which organic and human-made forces shape our lives and perception of the world around us.

For her new series, Mintz investigates hybrid states that exist between the natural and synthetic, as well as between the referential and the abstract. Employing two primary materials, metal and paper, the artist creates objects that are in opposition to the traditions of sculpture-making, which often rely on weighty or heavy-handed materials. Mintz manipulates brass and steel as some artists might wield a pencil—bending and soldering the fine gauge wire in a gestural manner that reflects the artist's hand and implies movement or growth. While her structures incorporate intricate geometric patterns, the overall physicality of each piece reflects the organic imperfections found in nature.

Mintz covers most sculptures in a soft Japanese Gampi paper, forming a tactile surface that both filters and deflects light, giving the work an ethereal presence. This nearly translucent material draws the viewer to the interior spaces, while evoking a fragility that contradicts the earth-bound metal work. Certain pieces are partially covered, visually exposing the insides of the structures and creating a Zoetrope-like illusion as the viewer changes perspective. This intimate interaction reflects Mintz's larger studio practice, which is rooted in the act of discovery and a sense of wonder.

Mintz received her BFA from California College of Art, Oakland and her MFA from Mills College in 1993. A former resident at Kala Art Institute in Berkeley, Mintz has developed her practice both as a sculptor and a printmaker. Her work has been exhibited at noted venues such the California Craft Museum, Bolinas Museum, Riverside Museum of Art, Southern Exposure, Catharine Clark Gallery and the San Francisco Museum of Modern Art: Artist Gallery.